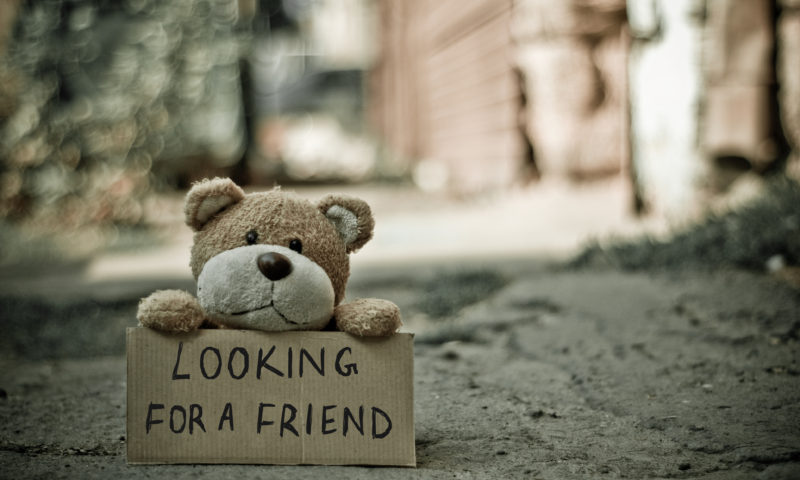 When content marketers craft and copywriters craft their email campaigns, they really want you to open that email they sent. So they spend lots of time researching and tracking which subject lines result in the most clicks.

A few years ago, I read a memorable post on Copyblogger, the popular content mastery site. According to the author, one subject line gets his emails opened more than any other. Can you guess? It’s only four words.

You are not alone.

That’s really simple, isn’t it? My first thought when I read this on his blog was, “Are we all really that lonely?” Then I thought again and realized that no, we’re not really “lonely,” exactly. Instead, we’re human, and humans need to know that someone else understands what we’re going through. For all of us, “what we’re going through” is struggle and adversity.

I don’t need to tell you how relevant “You are not alone” is to teachers. There’s a good reason why so many burn out and quit after just a few years. I remember that the average used to be five years, but I’m not sure whether that’s still accurate. What I do know is that it isn’t just about the money.

When I was a classroom teacher, I didn’t go home at the end of the day burdened by how little I was earning. Of course, more money would have been great, but the stress of managing a room of seventh-graders all day was what wore me down.

EdHero and the Power of Connection

This new platform, EdHero, has the potential to help teachers feel more connection to each other, not only with lesson-building but also with the personal connection. The chat feature will allow teachers to vent, share, and maybe even cry a little, with someone who actually “gets it.”

Don’t get me wrong. Almost everyone is sympathetic to teachers, and we hear people say things like “teachers are heroes” all the time. The problem is, I’m not sure anyone can really understand the stress of classroom teaching unless they’ve lived through it.

My First-Year Teaching Story (Feel free to share yours in the comments section!)

I was teaching in a tiny south Texas town in the Rio Grande Valley, and my students were mostly seventh graders. The town was a bit insular and clannish. Though they were very nice people, they could be a little standoffish with outsiders. Since I was new to the school and drove in every morning from San Antonio, I was definitely an outsider.

The town was a fascinating mix of Latino, Polish, and Czech-American cultures. I learned curse words in Spanish and Polish that year. I wouldn’t trade the experience for anything, but it was rough, at times. I developed migraines that year, sometimes so bad that I had to pull over to the side of the road and just sit there until I was able to drive again.

Basically, those kids “ate my lunch” that year. One little girl, in particular, made it her mission to torment me all year. How could I be so upset by a preteen? I’m sure insecurity had a lot to do with it, along with the fact that I knew my subject matter much better than I knew twelve-year-olds.

So yes, it was a stressful year, and the worst part is that I felt completely isolated. This was in the early days of the internet, before EdHero or any other social networks. Remember dial-up modems and AOL? I could have used more “You are not alone” that year.

A Little Disagreement with the Principal

The town was traditional, with traditional approaches to education. The Principal called me into his office one day after dismissal. He was concerned about my teaching future (hint, hint). See, I had SO much potential, but he was afraid my opportunities would be severely limited, not only at his school but also anywhere in Texas.

I was young, but I knew this much: Schools had no business hitting kids, for any reason, ever. Some of the kids weren’t happy that I refused to sign a note allowing them to accept “licks” from his paddle, rather than serving after-school detention. They didn’t like it one bit, and neither did he. He made it clear that I needed to be “flexible,” and understand that these kids were actually trying to take responsibility.

If they could be responsible enough to accept their “licks,” I needed to respect that, and sign those papers.

It was a clever argument, sort of, but it didn’t fly with me. I’d learned a thing or two about rhetoric as an English grad student, thank you very much. Besides that, I knew in my gut that it was wrong, and I wasn’t about to back down. Anyway, why was he so personally invested in being able to paddle kids? Did he really enjoy it that much?

I didn’t get fired. They needed me too badly, but I don’t think he was disappointed when I found a new job the next year.

That wasn’t the only rough patch that year. The other teachers weren’t impressed by my “I don’t use many worksheets” attitude. At the beginning of the year, they had the entire year’s worksheets already copied and filed away. That’s what they did. Every. Single. Day. Worksheets.

They probably thought I was arrogant and obnoxious. Maybe I was, at times. I was certainly idealistic.

There were a few other minor clashes. Although I coughed up the money, I was reluctant and unenthused when one of the veteran teachers came up with the brilliant idea of everyone chipping in $20.00 each for a gift of fancy boots (this is Texas, remember) as a Christmas gift for the Principal. I can’t remember the brand, but it was something he’d “never buy for himself,” and it would make him “so happy!”

This was my first year, and my annual pay was around $18,000. I wasn’t thrilled with being more or less forced to spend money I didn’t have on such a frivolous thing. I probably showed my annoyance.

Ironically, the boots didn’t make him happy at all. He exploded with disbelief and anger when he opened the present in front of us.

“Whose idea was this?” he bellowed. I’m not exaggerating, by the way.

“How much did these things cost?” He held them out at arm’s length, looking down through his bifocals and shaking his head.

I seem to remember that she managed, in a weak voice, to say something like, “Aren’t you even gonna try them on?” I couldn’t help feeling bad for the teacher who’d dreamed up the idea. She looked away, red-faced and humiliated as he stuffed the fancy boots back into the fancy box.

The Point of the Story

Okay, that last story might have seemed a little disconnected from the point of this post, which is that teachers need connection. I included it because it’s amusing to remember, but also to help explain just how isolated and unsupported I felt that year. I really had no one to vent to, other than my husband. I could have used a teacher support system that year.

So what about you?

I shared my first-year, stressed-out teacher stories. I’d love to hear yours! Feel free to share in the comments section.

EdHero provides you an opportunity to collaborate to create rich lessons, units, and courses; earn professional development certificates and sell your materials through your own store. Explore the marketplace, team up with teachers across the globe, advance your teaching skills, change kids’ lives and earn extra money – all in one place!

The Pre-launch excitement that we were eager to present to all the teachers and home-school parents is finally here. Join the group of first 100 Educational Material Authors today and receives all our Pre-Launch benefits. Reserve your spot in the first 100 today. You’ll be glad you did!

I'm a former English teacher and homeschool mom who currently writes curriculum and professional development resources for teachers. I live in the greater Baltimore area with my awesome husband and three wonderful, inquisitive kids. I'm very thankful to be able to use my classroom experience and passion for education to help teachers engage their students. In my free time I love to read, and I practice martial arts to stay fit.